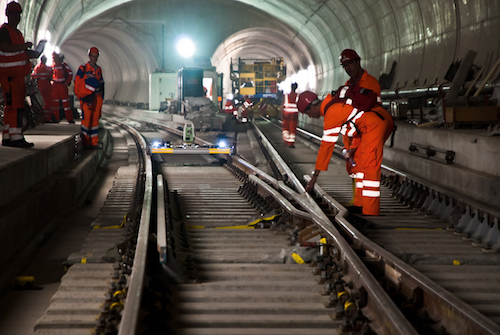 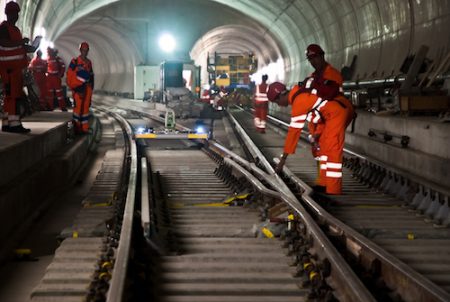 The world’s longest and deepest railway tunnel – the Gotthard Base Tunnel, scheduled for completion in June 2016 – is at the heart of a massive multi-million pound project to construct the New Rail Link through the Alps (NRLA), also known as AlpTransit, in Switzerland.

The New Rail Link will make it possible to cross the Alps from North to South in just 2 hours and 40 minutes and crosses the Alps with minimal gradients and wide curves. At only 550 metres above sea level, the highest point is no higher than the city of Berne.

The flat route will allow efficient rail transport of goods as well as shorter journey times in national and international passenger traffic.

With a route length of 57 km and a total of 151.84 km of tunnels, shafts and passages, the Gotthard Base Tunnel (GBT) is one of two tunnels at the heart of the scheme – the other one being the Ceneri Base Tunnel.

A Railway Systems General Contractor was tasked with installing the railway systems of the Gotthard Base Tunnel and the overground sections.

The Transtec Gotthard Consortium, comprising the four companies Alpiq, Alcatel-Lucent/Thales, Heitkamp and Balfour Beatty Rail, is responsible for installing, planning, and commissioning of the railway systems. The general contractor is a single-source partner to the owner, AlpTransit Gotthard Ltd. 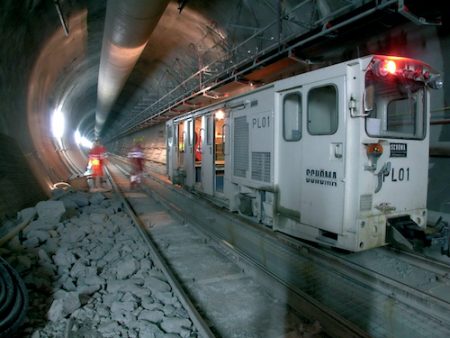 The engineers and installation specialists from Kummler+Matter (KuMa) and ARGE partnering Balfour Beatty Rail had to install 57 kilometres of catenary wire in single track tunnel tubes – a challenge never before encountered. This was a task that could only be accomplished successfully by drawing on many years of experience – as well as precision logistics at the installation site.

The tunnel consists of two 57-kilometres-long single-track tubes. These are connected together every 325 metres by cross passages.

Including all cross-passages, access tunnels and shafts, the total length of the tunnel system is over 152 km, joining the north portal at Erstfeld to the south portal at Bodio. With a rock overburden of up to 2300 metres, the Gotthard Base Tunnel is also the world’s deepest railway tunnel constructed to date.

For construction purposes, the Gotthard Base Tunnel was subdivided into various sections. Access adits provided access to the underground construction sites for workers, materials and machines.

To save time and costs, construction work proceeded on the various sections simultaneously. For construction of the Sedrun section, access from the surface was through a 1-kilometre-long horizontal access tunnel and two 800-metres-deep vertical shafts. From there, the two tubes were blast-driven to the north and south.

Because the deep overburden and high stresses threatened to deform the tunnel, special supporting means were necessary in some places. The engineers developed an innovative new concept with flexible steel rings which partly closed under the rock pressure and thereby prevented deformations in the completed structure.

The first final breakthrough of the Gotthard Base Tunnel took place on October 15, 2010, at 2.17 pm in the east tube at a distance of around 30 km from the south portal and 27 km from the north portal. The breakthrough took place with great accuracy: a deviation of only 8 cm horizontally and 1 cm vertically.

80% of the drive in the main tubes was cut by tunnel boring machines, 20 % by conventional drilling and blasting. A total of 28.2 million metric tons of excavated rock was transported out of the tunnel.

In May 2010, installation of the railway systems in the Gotthard Base Tunnel began: the first section to be installed is in the west tube between Bodio and Faido.

The railway systems include the track, the catenary, the electric power supply, cables, telecommunication and radio systems, safety and automation systems, and control systems.

Installation of the railway systems took place exclusively through the two portals in the north and south. Because of the limited amount of space in the tunnel, all materials were transported into it on the rails.

The Gotthard base Tunnel is expected to open on 2 June 2016.