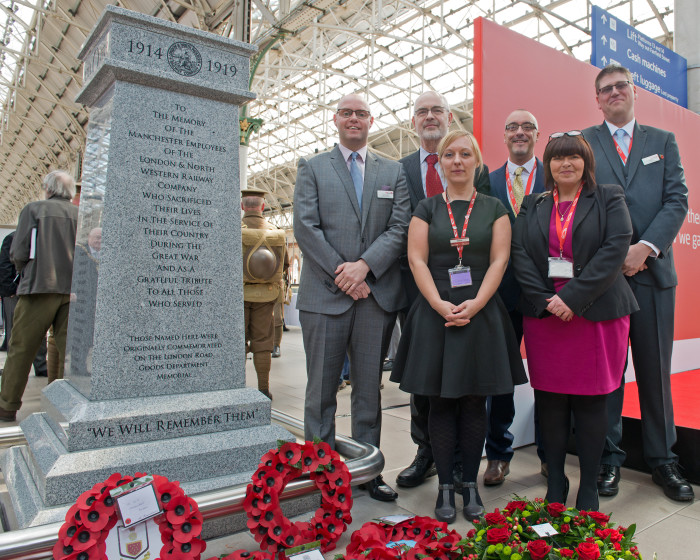 A memorial to 87 railwaymen who lost their lives in the Great War from 1914 – 1918 was unveiled at Manchester Piccadilly station yesterday (Wednesday 4 May).

The men, who all worked for the London & North Western Railway in the station’s Goods Depot were originally honoured on a bronze memorial that mysteriously disappeared during the redevelopment of the area in the 1960s.

Eager to restore their memory, two Train Managers for Virgin Trains, Andy Partington and Wayne McDonald took it upon themselves to have a new memorial erected centre stage at Piccadilly station, to then also act as a focal point for future remembrance events during the 100 year anniversary of the First World War and subsequent occasions.

With funding in place from Virgin Trains and the Railway Heritage Trust five years of hard work, involving numerous trips to France and various war archives, came to fruition at an emotional unveiling on Wednesday afternoon, attended by around 100 guests, including living family members of those men featured on the memorial.

“We are both incredibly proud and humbled to have played our part in getting such a wonderful new memorial in place to honour those brave men who paid the ultimate sacrifice,” explained Wayne McDonald.

“We owe them so much and it’s a fitting location, one that will be seen now by so many.”

Andy Savage, Executive Director of the Railway Heritage Trust, added: “The loss of the London Road memorial in the 1960s has been a major shame of the industry for many years. The Trust has wanted to restore if for a long time, but does not have the resource to actually manage such a project. It is thanks to the efforts of the local Virgin Trains staff, Wayne McDonald and Andy Partington, this has become a reality, and the Trust, along with Virgin, has been proud to be associated with their efforts.

“Today means so much to me and the family,” added Barbara Hurst, granddaughter of Sgt Daly, one of the 87 men featured on the memorial.

“We would like to thank Wayne, Andy, Virgin Trains and all those associated in helping to have such a fitting tribute to my granddad and all his colleagues.”