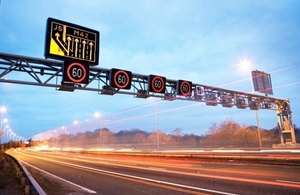 Drivers are set to benefit from improved journeys as a bridge maintenance scheme started on Sunday 8 May on the M25 between junction 10 (for the A3) and junction 11 (Chertsey).

Bridge joints will be replaced on the New Haw viaduct, which carries the M25 over Waterloo to Woking railway line, during an eighteen month scheme to refurbish the structure to provide drivers with safe and reliable journeys.

There will be no restrictions during the day, with work carried out using overnight lane closures with additional overnight carriageway closures on Sunday 8 May and over a series Saturday nights, with some extended working hours The scheme is due to be completed, weather permitting, in November 2017.

The work has been carefully planned to be carried out overnight, when traffic flows are lowest, to minimise disruption.

The first phase of the scheme will be carried out on the southern side of the bridge between May 2016 and January 2017.

Phase 2 will start in February 2017 and continue until November 2017 to replace joints on the northern side of the railway line.

Clearly signed diversions will be in place following the hollow square symbol via the A3, A245, A320 and A317. Work will also be carried out during the daytime with no impact to traffic. A weight limit of 120 tonnes will be in place throughout the scheme.

Drivers can find more detailed information about the work and subscribe to receive updates via the scheme website.