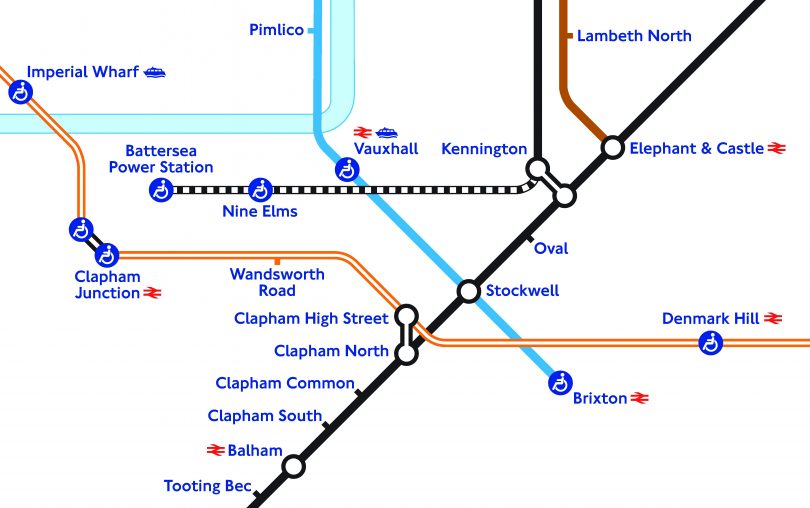 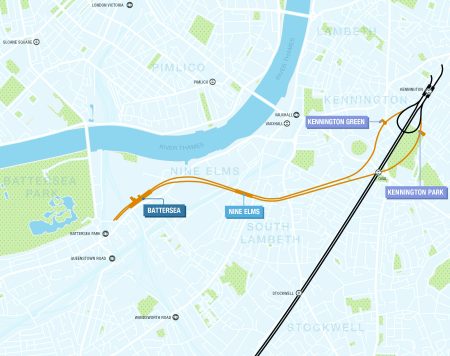 It is all go for the extension of the Northern line to regeneration hotspot Battersea, which is targeted for completion in 2020. The Underground station will be located by Prospect Place at Battersea Power Station, where alighting passengers will be welcomed by one of its most salient buildings.

In addition, a new Tube station is also being built at Nine Elms serving new developments such as the US Embassy and the redevelopment of Covent Garden Market, as well as existing communities.

The extension will lengthen the Charing Cross branch of the Northern line from Kennington to Battersea, with the overall aim to support the regeneration of the Vauxhall, Nine Elms and Battersea areas. It is hoped that around 20,000 homes and 25,000 jobs will be generated over the next 20 years.

The project is part of a much larger scheme to improve service levels on the Northern line. Other works include a signalling upgrade – which has resulted in a 20 per cent rise in capacity throughout central London during peak times – and plans to improve capacity in a number of tube stations whilst supporting regeneration (including Tottenham Court Road, Bank, Camden Town and Elephant & Castle).

The scheme has been split into four stages, 2016 has involved the assembling of specialist tunnel boring machines (TBMs); 2017 focuses on the main tunnelling; a fit out of the stations is planned for 2019; and by 2020 testing and commissioning will complete the project.

The construction of the tunnels is a challenging one, but likewise, so was the manufacture of the project’s two TBMs, which were built by NFM Technologies in Le Creusot in central France. After undergoing special factory testing to ensure that all components were of the highest quality, the machines are now being dismantled so they can be shipped to London ahead of their start date in 2017.

Each TBM ‘cutting head’ which will do the excavation work is just over six metres in diameter. At over 100 metres long each, the machines are equivalent to the length of the pitch at Wembley Stadium.

The TBMs will be launched from the Battersea work site where they will take separate routes to construct 5.2 metre diameter tunnels on their way to the shafts at Kennington Park and Kennington Green. The TBMs will run 24 hours a day, seven days a week, and as they advance forward, nearly 20,000 pre-cast concrete segments will be built in rings behind them.

“The TBMs will make their way to London later this year and in early 2017 will start powering their way under south London to create the first major Tube extension since the Jubilee line in the late 1990s. Their manufacture is a significant step forward in the project which, once complete, will help us to support jobs, homes and growth in this area and keep pace with London’s rapidly rising population.”

In Kennington, construction is well underway – temporary acoustic enclosures have been erected which significantly reduce noise and dust levels and will enable TfL (Transport for London) to work 24/7 within the enclosures during tunnelling works. TfL has excavated a 25m deep shaft within each of these enclosures in advance of sprayed concrete lining tunnelling starting at the site.

Material extracted during the tunnelling is being removed by lorry and taken to a dedicated conveyor at Battersea where it is loaded onto barges and transported by river to East Tilbury in Essex. Here, it’s being used to raise former landfill sites to create arable farmland. Over 120,000 tonnes of material has been removed so far in this way, taking over 6,000 lorry movements off the road. TfL’s target is to transport one million tonnes by river, removing 50,000 lorry journeys from the Capital’s busy roads.

The new Nine Elms Underground station will be located between Pascal Street and Wandsworth Road. Eighty-five per cent of the piling works are already complete and a 30-tonne gantry crane has been installed to support the excavation of the station box.

Progress is being made at Battersea Power Station, too. Excavation works are being carried out prior to the installation of the crossover box and piling is underway in preparation for the excavation of the station box.

During construction, the Northern Line Extension is supporting around 1,000 jobs, which will have a positive impact on the whole UK economy, including around 50 apprenticeships through the supply chain across the country. The wider Nine Elms regeneration programme is also on course to provide around 22,000 construction jobs, including apprenticeships, graduate opportunities and other starter roles for young Londoners.

Established in 1964, JSP is Europe’s leading independent manufacturer of industrial head protection and “above the neck” Personal Protective Equipment, including a new range of Height Safety equipment. JSP is strongly committed to innovation backed by an in–house research & development team with manufacturing and testing bases in Oxford, England. The company’s above-the-neck PPE can be made to measure, using corporate logos and colour schemes on Safety Helmets, Hearing Protection or Safety Eyewear.

JSP also manufactures a full range of eye and face protection including The Stealth™ 9000, weighing just 25g, with a wraparound 9 base curve Polycarbonate lens.  A popular choice of lightweight safety spectacle for the rail industry which can be fully customised with a corporate logo at the top of the spectacles arms. The slim stylish temples have been co-injection moulded with soft rubber to increase grip and provide excellent comfort levels. All of the Stealth™ 9000 safety spectacles come with superior hard-coated class 1 optical lenses.

An estimated 40 million people worldwide use JSP products daily to protect themselves at home and at work. JSP supplies end users via its distribution partners worldwide to help us achieve a wider reach and delivery.

Rutherford Global Power are world leaders in the supply of high voltage and low voltage electrical systems for the construction, tunnelling and mining industries.

Rutherford Global Power were delighted to be awarded the contract to supply Ferrovial Agroman Laing O’Rourke Joint Venture (FLOJV) with the complete scope of works for the high voltage and low voltage temporary power, both for the surface works and below ground into the tunnels.