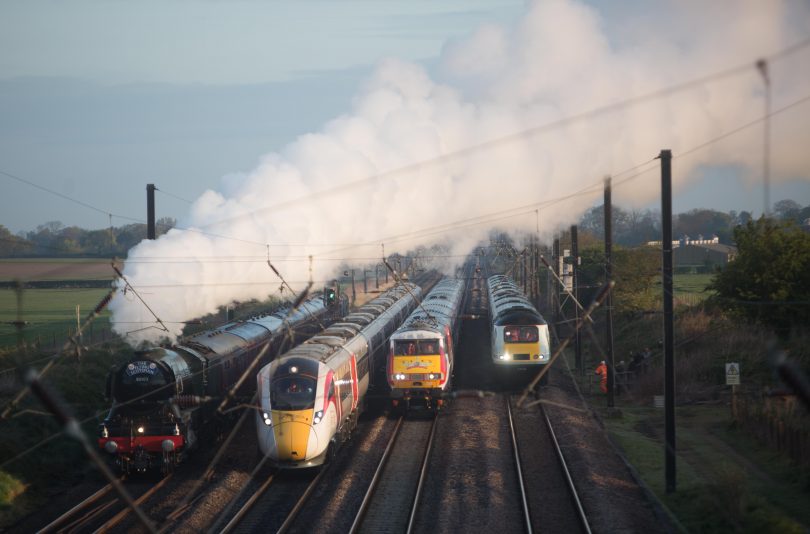 On Sunday (23 April) enthusiasts and history buffs were treated to a world first as four generations of trains representing the past, present and future of passenger rail travel ran side by side, in the same direction on the East Coast main line.

The event took place in the stunning Yorkshire countryside and featured the famous Flying Scotsman alongside two trains from Virgin Trains’ revitalised fleet — an HST Intercity 125 (Class 43), an Intercity 225 (Class 91) — and as well as the first new Virgin Azuma (Class 800), which is being built by Hitachi in the North East, and will come into service in 2018.

The once in a lifetime event was organised by Virgin Trains, National Railway Museum, Network Rail, Welcome to Yorkshire and Hitachi to celebrate the start of a new chapter for one of the country’s most iconic railway lines.

The journey through the Yorkshire countryside was enjoyed by crowds of rail fans who took advantage of viewing points along the route to marvel at the unique spectacle, which concluded at York station.

David Horne, Managing Director for Virgin Trains on the east coast, said: “We’re delighted to have presented this unique event showcasing the past, present and future of express rail travel in the UK, with our first Azuma travelling alongside ‘Flying Scotsman’ and trains from our current fleet. With our new Azuma trains entering service next year, this has been an opportunity to celebrate the icons of the railways and look forward to 2018 when we’ll usher in a new era for travel on the East Coast route.”

Paul Kirkman, Director for the National Railway Museum in York, which is custodian of the Flying Scotsman, said: “In what is genuinely a world first with our engines of the past, present and future coming together in this way, the National Railway Museum is delighted to have supported this unique celebration of our railway heritage, unlikely to be seen again in our lifetimes. It’s fitting to see the Flying Scotsman participate in something of this magnitude.”

Rob McIntosh, Managing Director for Network Rail on the London North Eastern and East Midlands route, said: “The East Coast Mainline and its long heritage is uniquely placed to have run these four historic trains from four different generations side by side. This was a long-standing vision for both myself and our industry partners and that vision has become a reality, creating a wonderful occasion to help us celebrate our proud rail heritage as well as the ongoing success of Britain’s railways. To have achieved this truly special, once in a generation event with the eyes of the world watching – and to have not caused any disruption to regular rail passengers – makes me immensely proud to have helped to make a moment in railway history.”

Karen Boswell, Managing Director for Hitachi Rail Europe, said: “We believe our new British built Azuma trains will inspire the next generation of rail enthusiasts and show how investment in new trains will transform passenger experiences on this iconic route.”

Sir Gary Verity, Chief Executive of Welcome to Yorkshire said; ‘What a moment in history; a once in a lifetime event on St George’s day and just days before the start of the Tour de Yorkshire. We’re immensely proud to have been involved in making this wonderful event a reality. It’s taken passion, drive and commitment, all true Yorkshire qualities that help make our county as great as it is.”