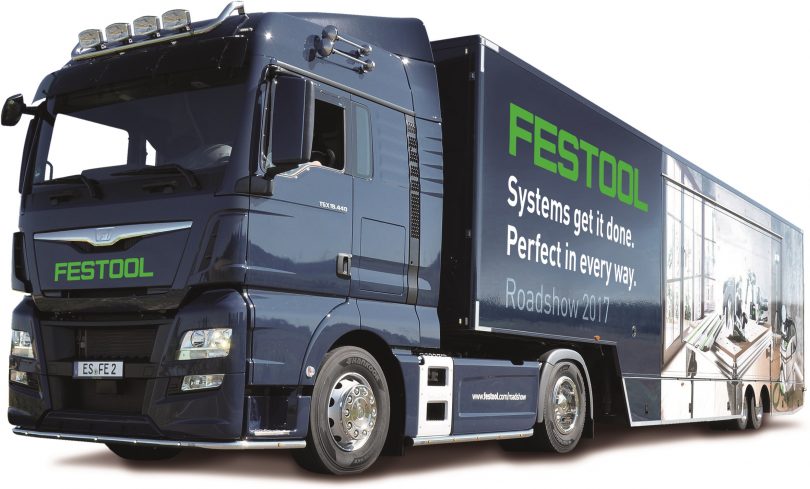 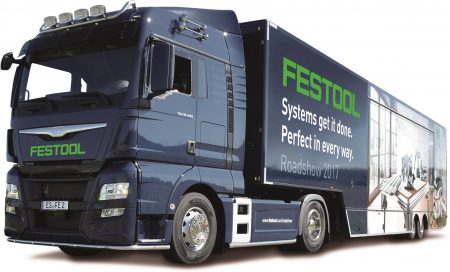 Festool, the leading supplier of high-end power tools and accessories, has launched a new Cycle Challenge to raise money for the British Lung Foundation (BLF) and to promote lung health to UK tradespeople.

The Cycle Challenge will feature two static Wattbikes that will join Festool’s impressive UK roadshow on its European leg in July. Members of the trade will have the chance to win £500 of Festool prizes if they bike the fastest mile, three miles or five miles.

Featuring Festool’s premium range of tools, the fully equipped truck will also provide visitors the opportunity to receive information, get hands-on with the tools and learn from a team of experts. With approximately 200 sq m of space, visitors will find new products for 2017, as well as Festool’s complete range of dust extractors that help safeguard a dust-free work environment.

The company has been selling top quality cycling tops as a fundraising initiative on its eBay page here: http://www.ebay.co.uk/itm/152528024920 and will be raising thousands of pounds for the BLF as part of the Breathe Easy with Festool Dust Extraction campaign.

“We’ve previously promoted the importance of safer, dust-free working conditions with the help of the BLF. Our latest Breathe Easy campaign is attempting to raise awareness of lung health amongst tradesmen who are most at risk of lung problems.”

The money made from the limited edition cycle shirts will go towards research into life threatening lung diseases, as well as the care provided by the BLF for those suffering from conditions like asbestosis, asthma, lung cancer, COPD, IPF, mesothelioma and more.

Dr Penny Woods, Chief Executive of the British Lung Foundation, said: “We are so grateful to Festool and to everyone using pedal-power in their Cycle Challenge, raising money to help us fight lung disease. This generous support will allow us to continue investing in research into new treatments and cures, and provide support to help people affected by lung disease, throughout the UK.”

Exposure to wood dust, a known carcinogen, can also increase the risk of lung cancer. Alongside heart disease and non-respiratory cancer, lung disease is one of the UK’s three biggest killers. The British Lung Foundation’s Battle for Breath study found that more than 43,000 people are diagnosed with lung cancer each year. Around 12 million people, one in five of the UK population, have been diagnosed with lung disease. Respiratory disease costs the UK £11 billion each year.

Last year, the BLF’s report found that lung disease mortality rates haven’t improved in the last 10 years and the UK now has the fourth highest mortality rate in Europe.

Ideal for mobile use and assembly, the Festool range of safe and robust dust extractors are lightweight and compact, ideal to transport from job to job, again saving time for the tradesperson. Festool offers a range of dust extractors which are suitable for any job from low to high class dust, including general work to anything that is a known carcinogen including lead, cadmium and asbestos.