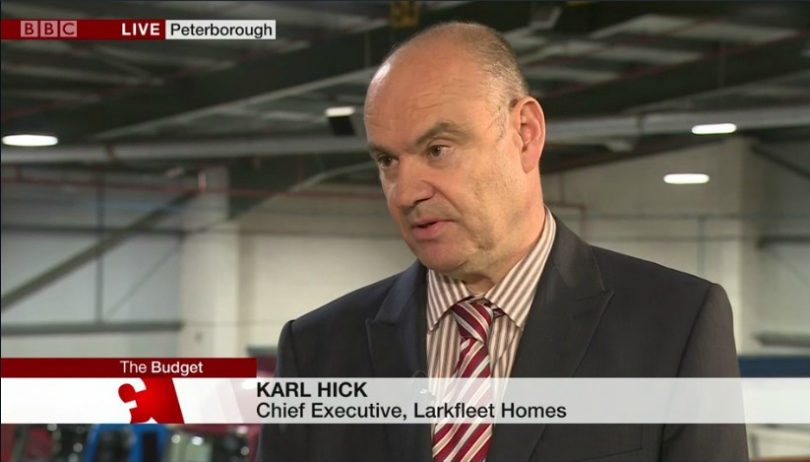 Housing developer Larkfleet Homes (www.larkfleethomes.co.uk) – based in Bourne, Lincolnshire – has welcomed changes to the housing market put forward in the budget by Chancellor of the Exchequer Philip Hammond.

In particular, it has welcomed news that most first-time buyers will not have to pay Stamp Duty, giving a significant boost to the ability of young people to get onto the ‘housing ladder;’

The company has welcomed other budget announcements, too, but has also voiced some concerns about the ability of the housing industry to meet the government’s target of building 300,000 new houses every year by the mid 2020s.

Interviewed live on BBC2 television during the channel’s coverage of the budget, Larkfleet CEO Karl Hick warned that Brexit was in danger of depriving the industry of the skilled workforce it needs to build new homes. Many EU nationals are leaving the UK, he said, and others are less willing to come.

Karl also said that one of the big challenges facing small and medium-sized housebuilders such as Larkfleet is the ability to get the cash they need to build more homes more quickly.

This was a topic that Philip Hammond specifically addressed during his budget speech, saying: “If we don’t do more to support the growth of the small and medium enterprise housebuilding sector we will remain dependent on the major national housebuilders that dominate the industry.”

Mr Hammond committed a total of at least £44 billion of capital funding, loans and guarantees to support the housing market over the next five years.

In the budget the chancellor has also committed to:

·         An additional £34 million to develop construction skills across the country.

He said: “Put simply, successive governments over decades have failed to build enough homes to deliver the home-owning dream that this country has always been proud of.

“By choosing to build we send a message to the next generation that getting on the housing ladder is not just a dream of your parents’ past but a reality for your future.”

The budget also included the announcement that Stamp Duty will be abolished for all first-time buyer purchases up to £300,000. To ensure that this relief also helps first-time buyers in very high price areas like London, it will also be available on the first £300,000 of the purchase price of properties up to £500,000.

All these moves have been welcomed by Karl Hick and Larkfleet.