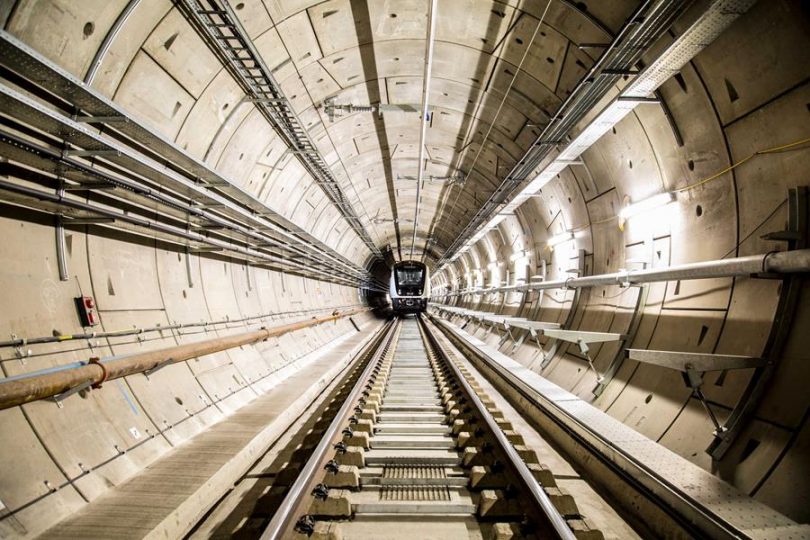 Crossrail Limited and Transport for London (TfL) have hailed a major milestone for Europe’s largest infrastructure project as the first new Elizabeth line train was tested in the brand new tunnels through London last week. The new train – built by Bombardier engineers in Derby – was the first to be driven from Abbey Wood. It entered the new tunnels at Plumstead Portal and travelled under the Thames heading for Connaught Tunnel before returning to Abbey Wood station.

The Elizabeth line is set to transform transport in London with quicker, easier and more accessible journeys when it launches in December. The first train to be driven in the tunnels comes as construction reaches its final stages.

Rigorous testing of the railway and signalling infrastructure will now begin to ensure services are safe and reliable for the opening in 10 months’ time. This is the first of hundreds of test runs that will take place throughout the year.

Andrew Wolstenholme, Chief Executive, Crossrail, said: “The start of infrastructure testing is a major milestone moment. It’s testament to the men and women who have, and continue to, work tirelessly on the project that we are now welcoming the first Elizabeth line train that’s powered by the new overhead lines, into the tunnels.

“The Crossrail programme is now over 90% complete and this heralds the start of our works to bring together the new stations, track, power, signalling and trains ahead of the Elizabeth line opening in December.”

Howard Smith, Operations Director for the Elizabeth line, said: “This is a huge milestone for the project, nine years after construction first began. I’m thrilled to see the first train make its maiden voyage from Abbey Wood through the brand new tunnels.

“Crucial testing is now underway to validate the safety and reliability of the Elizabeth line ahead of the launch. We look forward to welcoming customers onto our new railway this December, when their experience of travelling across London will be transformed for the better.”

The Mayor of London, Sadiq Khan, said: “This is a hugely exciting moment in the construction of the Elizabeth line. Everyone involved in Europe’s largest infrastructure project has done a wonderful job and it’s thanks to their hard work that we are another key step closer to running our first passenger service. When it opens later this year, the Elizabeth line is going to transform travel across London and the South East, helping to improve the lives of millions of Londoners, stimulating much needed housing development across the capital, and providing a huge boost to our economy.”

Rail Minister Jo Johnson, said: “The maiden journey of a brand new train through the Elizabeth line tunnels is a milestone moment in one of the most ambitious infrastructure projects ever undertaken in the UK.

“This is part of this government’s record spending on upgrading our national rail network and delivers on our commitment to transform journeys across London and the South East, transforming journeys for over 200 million passengers a year, boosting capacity and driving economic growth.”

Earlier this month, Crossrail Limited successfully activated the 25kV overhead lines in a section of the tunnels beneath the streets of London, a landmark moment that ensured this first journey could take place. One train will initially be used for testing in the tunnels before more are gradually introduced. A significant amount of work continues to complete all stations on the route as well as bringing together the complicated interfaces between track, power, signalling and trains.

The Elizabeth line is jointly sponsored by the Department for Transport (DfT) and TfL. When complete, London’s new railway will carry over 200 million passengers per year and will add 10 per cent to central London’s rail capacity.

The introduction of the Elizabeth line supports the draft Mayor’s Transport Strategy, which aims to create a fairer, greener, healthier and more prosperous city by improving public transport and reducing reliance on car journeys.