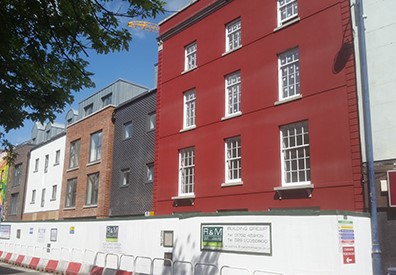 Cardiff-based R&M Williams has had a winning start to spring after being shortlisted for two respected construction awards.

Its work on Coastal Housing’s Urban Quarter project on the High Street in Swansea has won a Considerate Constructors Award National Site Award, although it won’t find out if this is a bronze, silver or gold award until the grand finals in London on April 20th.

The Urban Quarter project has also seen the family business shortlisted for a Local Authority Building Control Building Excellence Award – the finals will be held in Cardiff on April 27th.

The Considerate Constructors Award (CCS) assesses how well a construction company works with the local community when taking on a project.

R&M Williams scored 42 out of 50 from its inspection and was praised for its engagement with the local community, attention to environmental matters as well as its participation in local career days.

The R&M team will now attend the grand final in London on the 20th to learn which award it has gained.

The company, which has Construction, Maintenance, Responsive and Trade divisions, was also shortlisted for the National Final of the Royal Institute of Chartered Surveyors for the £25million regeneration project.

Darryn Parry, Managing Director of R&M Williams, said: “The Urban Quarter construction has been a great project for us at R&M Williams. It has been rewarding and challenging as our team has been working on residential, office and retail space. We have also had to work with mixed materials and different building techniques.

“We realised early on that involving the community in the process was pivotal and so we are thrilled to have won a Considerate Constructors Award. Working with Coastal Housing Group and Holder Mathias architects on this project has been great and we look forward to working with them again in the future.”