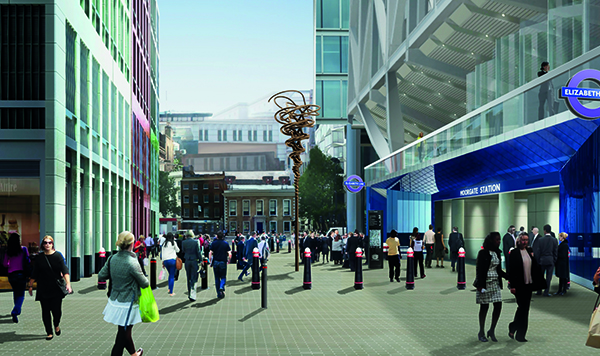 Yayoi Kusama and Conrad Shawcross have been unveiled as the final two artists selected to create major new works of public art for the Crossrail Art Programme.

The artists’ plants were unveiled at the launch of Art Capital: Art for the Elizabeth line, a new exhibition at Whitechapel Gallery that opened on 13 March 2018. The exhibition showcases the ideas of all nine artists who have been selected for the Crossrail Art Programme – a unique series of ten public artworks that are being integrated into seven stations on the new Elizabeth line.

Kusama, who has been named the world’s most popular artist for global museum attendance, is creating her first permanent UK installation. Title ‘Infinite Accumulation,’ the site-specific work develops her instantly recognisable motif – the polka dot – into a series of flowing, mirrored steel sculptures, each up to 12 metres wide and 10 metres tall. Undulating tubular rods will support a sequence of highly polishes spheres, guiding passengers from the public spaces outside the station into the eastern entrance of the Elizabeth line station at Broadgate.

‘Manifold’ by British artist Conrad Shawcross will be a bronze sculpture positioned outside the Moorgate entrance of the Elizabeth line station. Taking inspiration from musical harmony, Shawcross has used a machine based on the Victorian harmonograph – with its two pendulums that draw the oscillation of a sound wave – to map the complex shape of a specific piano chord that is falling into silence. Encapsulating the dynamic visual potential of harmonics, the resulting ‘drawing’ will be sculpted in three dimensions using bronze to create a unique signpost at the entrance of the station.

Conrad Shawcross said: “It has been a long journey to this point and I’m so excited to now be able to officially talk about the ambitious commission. Finding a home for a work is always the final but hardest part of an artist’s creative process, so knowing that an idea will have a permanent location is such a good feeling; all the better for it being my home town. To be alongside such a great progression of artists peppered along the epic engineering endeavour that is Crossrail is such an exciting thing.”

David Lockyer, Head of Broadgate, British Land said: “Creating a public arena for culture at Broadgate is key to the campus’ evolution into a mixed-use, world class neighbourhood for London. We are delighted to support Yayoi Kusama’s ‘Infinite Accumulation.’ It will be a fantastic addition to the campus and will further position the wider area as an exciting arts and cultural hub for London.”

Ross Sayers, Development Director, Landsec said: “It’s a privilege to work with Conrad Shawcross as we deliver this strategically important site for the City of London. Conrad’s ‘Manifold’ sculpture, which maps the complex shape of a piano chord, perfectly complements the musical heritage of the nearby Barbican Centre, home of the LSP and the Guildhall School of Music and Drama.”

Catherine McGuinness, Policy Chairman, City of London Corporation said: “As one of the UK’s major supporters of the arts, the City of London Corporation has taken pride in supporting the Crossrail Art Programme, which has brought together well-respected artists from around the world. These hugely creative pieces of art are turning heads and will enliven people’s experience of travelling around London on the Elizabeth line. My colleague and I congratulate Yayoi Kusama and Conrad Shawcross on being invited to take part in the programme.”

Sir Terry Morgan, Crossrail Chairman said: “ The addition of Yayoi Kusama and Conrad Shawcross to the already hugely impressive roster of artists creating bespoke works for the Elizabeth line is a testament to the scale and ambition to London’s collection of public art in a generation. It will cement London’s place as a global capital for arts and culture.”

Liverpool Street in the heart of the City of London is one of 10 brand new Elizabeth line stations being built across the capital. When the Elizabeth line opens this December, it will provide quicker, easier and more accessible journeys between London’s major airports and key employment, leisure and business districts. Transport for London’s newest railway will carry over 200 million passengers per year, adding 10% capacity to central London’s rail network. 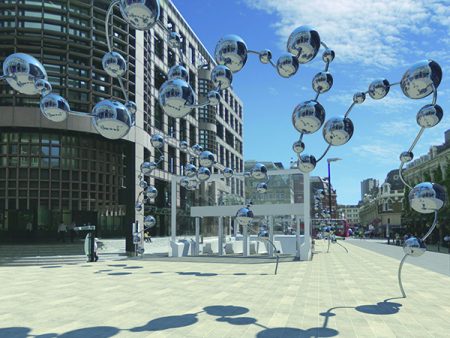