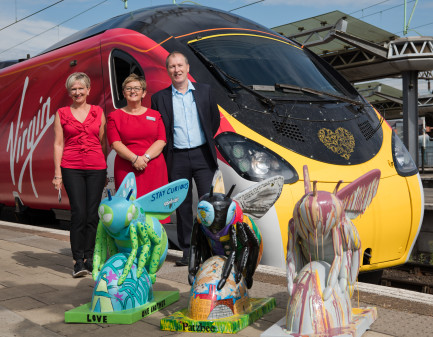 Virgin Trains has named one of its Pendolino trains to mark the launch of Bee in the City.

The 390001 Pendolino train had its new ‘Bee Together’ nameplate unveiled at Manchester Piccadilly station on Friday 20th July  ahead of the start of the city-wide public art experience that is expected to attract around 1m visitors to the city centre this summer.

Over 100 individually designed Bees will go on display through streets, parks and public spaces in Manchester taking people on a journey of discovery through the city between July-September. Visitors will be able to follow the free, accessible trail, looking out for the two Virgin Trains Bees, with help from the Bee in the City App, unlocking exciting rewards in the process.

“We’re incredibly excited to BEE involved,” enthused Ady Crymble, Customer Experience Manager for Virgin Trains in Manchester. “The bees will bring added life and energy to the city centre, connecting the wider community and showcasing all that is good about Manchester.

“We wanted a name that captured the spirit of a city famous from its enterprise, industriousness and creativity. We are incredibly proud to have served Manchester and the wider community for the past 21 years and we will be looking to add a bit of Virgin Trains fun to this summer.”

Today also saw the launch of a children’s competition to design their very own bee. The winner will see their creation brought to life and presented to them as a ‘money can’t buy’ prize. Colouring-in sheets are available to pick up from the Virgin Trains team at Manchester Piccadilly.

Virgin Trains employs close to 700 people in Manchester, operating 47 services every day (Monday – Saturday) from Manchester Piccadilly to and from London, carrying over 10 million customers each year, providing a vital link to help strengthen local economies.

Sally-Ann Wilkinson, Director, Wild in Art said: “We are thrilled to have Virgin Trains on board as a Bee in the City Presenting Partner. Thousands of families will be travelling to Manchester on Virgin Trains from July to September to enjoy what will be one of the biggest and most spectacular public art events ever. And what an honour to have our own train!”

After the naming, Pendolino 390001 ‘Bee Together’ headed to London on the first of many services that will see the train travel around 300,000 miles in the next twelve months.