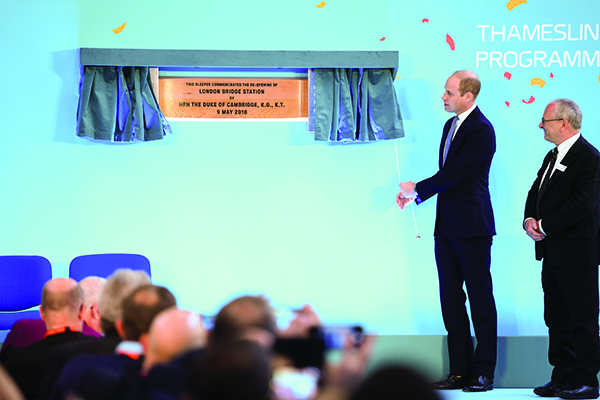 The UK’s fourth busiest railway station, for the past five years London Bridge has been the subject of major redevelopment works.

The £1billion transformation by network rail was completed earlier this year and has resulted in a number of benefits for passengers including doubling capacity and enabling more and faster connections. The end of the project was officially signalled in May 2018 when London Bridge was reopened by The Duke of Cambridge, Prince William. Since then, the improvements have received widespread recognition from passengers and industry professionals.

At the New London Awards 2018, the London Bridge Station improvements project won three awards. As well as being named the Overall Winner 2018, the project was also successful in the ‘Transport & Infrastructure’ category and won the Sustainability Prize.

Since work began in 2013, London Bridge has been transformed by Network Rail as part of the government-sponsored Thameslink Programme, while remaining open for the 50 million passengers that use London’s oldest station each year. The vast new concourse, larger than the pitch at Wembley and big enough to lay the shard down inside, unites all fifteen platforms for the first time and modern facilities make the landmark station fully accessible for all. For the first time in over a hundred and fifty years, passengers at London Bridge – which was built in the 19th century as two separate stations – are able to reach all 15 platforms from one concourse.

There are two new entrances on Tooley Street, which will connect the north and south sides of the station, while the completion of the five new platforms will allow Cannon Street services to once again stop at London Bridge.

The tracks through and around the station have been entirely remodelled to modernise the infrastructure and to allow more trains to travel through London, reducing delays and bringing more reliable journeys to more destinations than ever before.

The 15 new platforms were completely rebuilt with three more through platforms helping to service the stations on the north side of the Thames and the number of terminating platforms reduced to six. Two platforms are dedicated to the Thameslink service which allows a very significant uplift in services able to stop and pass through the station, carrying more carriages before and reaching a 138 station network stretching from Bedford to Brighton.

In May 2018, the station was officially reopened by The Duke of Cambridge, Prince William. His Royal Highness arrived at London Bridge Station on a new Siemens Class 700 Thameslink train where he met the Secretary of State, the Rt Hon Chris Grayling MP and Mark Carne, Chief Executive of Network Rail. 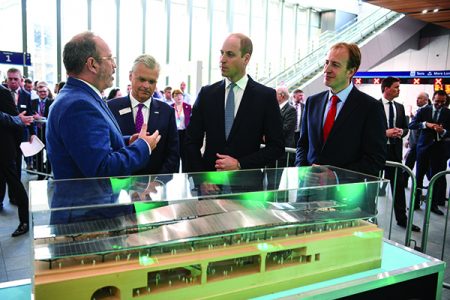 His Royal Highness then descended from the platform into the new station concourse to meet groups of apprentices, project leaders and staff involved in the redevelopment. They were then given a singing performance by children from the local primary school before unveiling a ceremonial ‘sleeper’ marking the completion of the improved station.

“Today, we are indebted to the thousands of men and women who have built a modern, accessible and iconic station fit for London’s future, and the patience of passengers who will now see a transformation in their journeys.

“Thanks to government-sponsored investment, London Bridge station will be the beating heart of the Thameslink, offering thousands of commuters more frequent and reliable services, with modern new trains using pioneering world-first technology to enable better journeys across the entire route.

“It is my honour to welcome the Duke of Cambridge to London Bridge station to officially declare it open.”

“This station has been rebuilt from its Victorian foundations upwards, while still providing a service for the 48 million people who use it every year, to be delivered on the very day we said we would five years ago.

“This is a station that represents a transformation in passenger experience, a catalyst for economic growth and a world first in the use of Digital Railway technology demonstrating our vision of the future.

“I give my thanks to the great people and great teams behind this fantastic project, as well as to our customers for their patience and understanding during these major works.”

The increased accessibility to the station, with entrances to the north, south, east and west, London Bridge is now filled with a variety of retail offerings. Customers are now able to enjoy greater choice of dining and shopping brands.

Independent retailer Bob’s Lobster was one of the first to open its doors in May having built up a successful business serving food from an adapted VW Camper Van. The station’s bustling dining offer will be further complemented by restaurant Comptoir Libanais who will open in the autumn.

London Bridge also saw the opening of a brand new retail concept in Urban Express, which offers products from premium UK brands, including wine, ready meals, books and much more. The Book Shop and high street favourite Greggs joined the station in May and July respectively, and further cater for the increased consumer appetite for on-the-go shopping.

The first station at London Bridge was opened in December 1836. The simple structure included a booking hall, company offices and two platforms.

London Bridge has been transformed as part of the Thameslink Programme. The ten-year programme of work is designed to create faster, more frequent, more reliable and better connected journeys on new, spacious trains every two to three minutes through central London at the busiest times. Since 2009 the Thameslink Programme has rebuilt Blackfriars, Farringdon and London Bridge stations and delivered new railway infrastructure including the Borough Viaduct and Bermondsey Dive Under.

New trains and services to London from Kent, Sussex, Surrey, Bedfordshire, Hertfordshire, Cambridgeshire and Peterborough will make space for around 40,000 more peak time passengers, rising to 60,000 by 2019. The Thameslink Programme is also leading the way in introducing digital railway technology, making trains safer and more reliable.

For more information on the London Bridge improvements, and other projects led by Network Rail, please visit www.networkrail.co.uk.