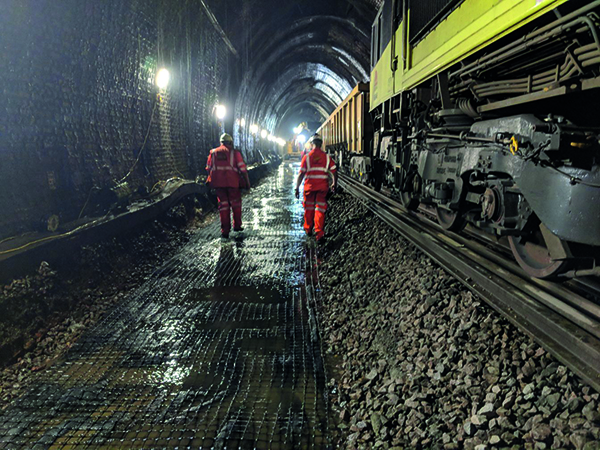 Passengers are experiencing more reliable and faster journeys on the two-mile long Sevenoaks tunnel thanks to a two-year renewal of infrastructure.

The tunnel has been given a £21million refurbishment which has included the replacement of thousands of sleepers, the laying of several miles of new track and the installation of new drainage systems. The completion of the main works has resulted in a reduction in delays for passengers of nearly 20% with journey times through the tunnel up to 64 seconds quicker due to the lifting of speed restrictions.

John Halsall, Network Rail South East route managing director, said: “We’re pleased to have delivered this project to upgrade one of the country’s oldest and longest rail tunnels using the investment provided by Government through the Thameslink Resilience Programme. Delays due to flooding had become a regular occurrence through the Sevenoaks Tunnel but we’ve been able reduce delays by a fifth, giving passengers well-earned relief to their journeys, and I’d like to thank them for their patience while we’ve carried out this vital work.”

The work on the 150 year-old tunnel began in 2017 and has included partially lining 13 ventilation shafts, measuring up to 120 metres deep below the Sevenoaks Weald, which has stopped water flooding the tracks below and causing delays. Engineers have also overhauled its electrical systems to make them more reliable and ensure that other lines in the area can operate if there is a power issue in the tunnel.

The work will improve reliability for Southeastern as well as Thameslink services, which are affected by knock-on delays and congestion when Southeastern’s London services need to be diverted.

The team have employed several innovations during the project, including 3D modelling to prove the suitability of special padded sleepers for reducing stress to the Victorian structure and enabling faster train speeds, while safe access methods have allowed the tunnel to stay open during most of the works to the ventilation shafts, where previously line closures would have been required.

Journeys through the Sevenoaks tunnel are now smoother and faster now that the work has allowed speed restrictions to be removed with trains able to travel at up to 90mph instead of 50mph, nearly halving journey times through it.

Ellie Burrows, Southeastern’s train services director, said: “We’re very pleased that this major work on the Sevenoaks Tunnel has been carried out and will improve the reliability of services for our passengers. I’d like to thank passengers for their patience during the 15 weekend closures of the line which have been necessary to allow this work to be carried out.”

Other improvement works have also been carried out locally to maximise the use of line closures including structural improvements to adjacent tunnels, ballast cleaning, repairing small areas of worn track in more than 36 locations and the replacement of 700 yards of sleepers suffering from ‘concrete cancer’ degradation outside the southern end of the tunnel.

The project has been a major element of a £300m government-funded programme to tackle delay hotspots and improve railway reliability for the new Thameslink timetable.