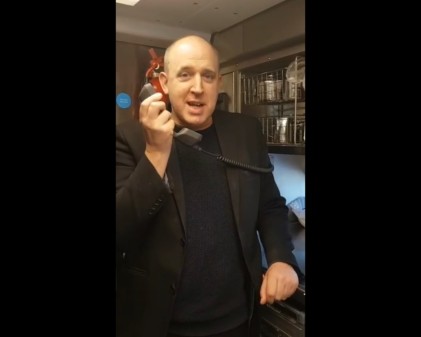 Virgin Trains customers have been treated to an impromptu onboard performance by one-liner legend Tim Vine.

The award-winning comedian delivered a five-minute set over the tannoy of the Euston to Manchester service after being invited to share some gags by Train Manager Darren Jones.

After announcing himself as “your onboard comedian”, Tim followed up with a series of quips, including: “I said to this bloke I’d like to find out when the next train from London to Glasgow is. He said why don’t you look online? I said it’s a bit dangerous isn’t it?”

After the set, the comedian said his “career had peaked” and was cheered by fellow passengers as he returned to his seat.

Train Manager Darren Jones asked the comedian if he wanted to make an announcement shortly after checking his ticket.

He said: “When I asked for his ticket, I immediately recognised him and we had brief chat. I asked if he was up for doing an announcement. It turns out he’s always wanted to do it and accepted the challenge straight away. It made me really laugh. As he walked through a few people said: ‘Nice one Tim.’ There was great feedback.”