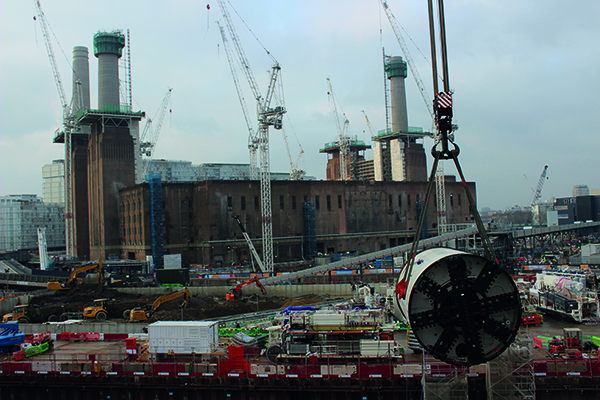 The Northern Line Extension has passed a major milestone after an engineering train successfully travelled the entire length of the new tunnels from Kennington to Battersea, for the first time.

The train entered the new 3.2km tunnels at Kennington station, travelling through the newly-constructed step-plate junction that connects the existing Northern line tunnels to the extension.

It then continued to the new Nine Elms Tube station before terminating at the extension’s second new station at Battersea. The train carried 750 metres of power cable into the extension which was installed by 15 engineers.

The first train to be driven along the full length of the Northern Line Extension marks the completion of the tunnels and track.

Work to extend the line now focuses on the fit-out of the new stations, installing the power supply, and extending the signalling used on the Northern line to the extension.

The extension – which is expected to be completed in autumn 2021, with a target of September – is the first major Tube line extension since the Jubilee line in the late 1990s.

The opening timetable continues to align with the wider regeneration of the Vauxhall Nine Elms Battersea area and ensures that new Northern line services will operate when demand for the line is there.

“I’m delighted that the Northern Line Extension has reached such an important milestone, with a train running through the entire length of the tunnel, passing through new state-of-the-art stations.

“The track and tunnels are now complete, and I want to thank the men and women whose expertise is delivering this world-class project.

“The Northern Line extension is the first major Tube extension since the late 1990s, and will support thousands of new jobs and homes in the capital.”

“Running a train through the new section of railway tunnel is an exciting moment and demonstrates the hard work of hundreds of men and women who are working around the clock to build the first new Tube extension in two decades.

“The Northern Line Extension will support jobs, homes and growth in one of the most exciting new destinations in London, help keep pace with the capital’s rising population, and is creating jobs through the supply chain across the UK.”

“We welcome the announcement of a clear timeline for the Northern Line Extension to Battersea and Nine Elms.

“The new Tube stations will provide a vital route into the heart of the Vauxhall Nine Elms and Battersea opportunity area, unlocking the growth potential of this riverfront district and connecting it directly with the rest of central London.

“This extension is part of an extensive package of infrastructure work being delivered, including a new riverboat pier and road improvements to Nine Elms Lane and the wider neighbourhood, all funded by £1.5bn investment going into the area.

The extension will bring Battersea and surrounding areas to within 15 minutes of the West End and City. In addition, construction of the extension is boosting the UK economy and supporting around 1,000 jobs, including 50 apprenticeships.

Central to the success of the project so far has been the use of tunnel boring machines. In 2017 the NLE moved a significant step forward as tunnelling work to extend the line to Battersea began. Two giant tunnel boring machines, known as Helen and Amy, were lowered 20 metres below ground in Battersea in February. Helen began her 3.2km tunnelling journey a few months later in April while Amy set off in May.

Six months later a major breakthrough was achieved as Amy broke through at Kennington, meaning two 3.2km tunnels from Battersea Power Station have now been built. As the 100 metre long tunnelling machines advanced forward, nearly 20,000 precast concrete segments were put in place to form rings to line the tunnels.

A conveyor system then took the spoil from the tunnels up to barges on the River Thames. During the course of their journey, Helen and Amy excavated more than 300,000 tonnes of earth, which was subsequently transported to Goshems Farm in East Tilbury, Essex, saving thousands of lorry journeys from the Capital’s roads. The earth has been used to create arable farmland.

Each machine was capable of tunnelling up to 30 metres a day with teams of around 50 people operating them. 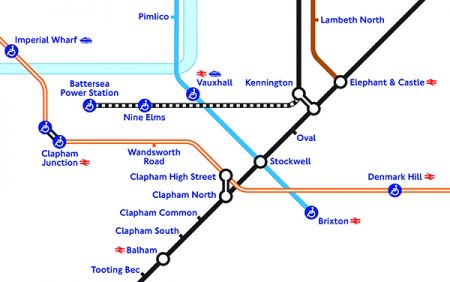