The Metro Express Project (the Project) in Mauritius is 26 km long and will connect the main urban centres of the country, from Curepipe to the capital, Port Louis via 19 stations. Phase 1 of the project has just been completed and phase 2 is set to follow in two years’ time.

The Project has been developed in response to the rising cost of traffic congestion. The idea is that the Project will benefit the economy and help in providing a safer means of mobility in the local transport sector. As the system is solely powered by electricity, it will also significantly contribute to the sustainable development of the island by lowering carbon emission.

Why is the new light rail system needed now?

“This is the first LRT system to be implemented in Mauritius since the dismantling of the old heavy railway line in 1960s. Since the country’s independence over half a century ago, Mauritius has known a tremendous development and the country is now targeting to become a high-income economy. The success of its fast-growing economy also created some less desirable side effects, for example, the rate of car ownership which is around 212 motor vehicles for every 1,000 inhabitants. For a small developing island nation like Mauritius, this rate of high traffic density is not sustainable.

“Indeed, a study by the Road Development Authority (RDA) in Mauritius in 2008 concluded that traffic congestion was costing the Mauritian economy about MUR 4 billion (approximately GBP 89 million) per year and this was expected to increase to MUR 10 billion (approximately GBP 222 million) by 2030. The need for an alternate, safe, sustainable and clean mass transit system was a necessity for Mauritius.

“Furthermore, the Metro Express adds an alternate mode of mobility in the local public transport sector and is expected to be an engine for economic growth. The Metro Express offers Mauritians the possibility of combining multiple modes of transportation that suit their need by offering a fast, safe and clean option of mobility as well as entrepreneurial opportunities along the alignment.”

What are the main aspects of construction?

“The Metro Express Light Rail system alignment passes through the most congested urban areas of Mauritius. To construct such a light rail system in a busy and congested urban agglomeration is very challenging as it involves working in live traffic condition and within business areas; utility relocation; traffic diversion; communication and stakeholder management; coordination with authorities; construction and environmental related issues such as noise, dust and vibration need to be monitored closely during construction stage.

“The track system is of standard gauge dual track. Different types of tracks along the corridor have been constructed depending on the type of environment, for example, there are plinth track on elevated structures, ballasted track in open areas and embedded tracks in urban areas. There are interfaces with other modes of transport at intersections with the roads, and traffic-signalling system, giving priority to the LRVs, has been design to provide the required level of service. The overall road networks at these intersections are being re-engineered and appropriate traffic management schemes are being implemented for the efficient redistribution of traffic flow at the concerned regions.

“One of the innovative systems that MEL is introducing in Mauritius is the Electronic Ticketing System (ETS), a cashless ticketing system. The system is being tailored and implemented by ELIS Infotech system, China. In order to facilitate an integrated mode of transport, MEL envisages expanding the use of the ETS across the whole public transport sector, starting with feeder buses along the corridor. At the moment, each of our stations is expected to be equipped with AVVM, Ticketing Card Reader (TCR), Mobile Ticket Reader (MTR) amongst others.”

What are the environmental impacts of the project?

“The contractor, Larsen & Toubro is strictly following the recommendations of the Environment Management Plan, following an Environment Impact Assessment report carried out by SCE.

“The new LRT system also employs multiple environmentally friendly measures including the use of recycled and rain-water collection for washing of the light rail vehicles. Furthermore, for every 1 tree that had to be felled to make way for the Project, 3 fresh trees are being planted.

“Moreover, given that the railway is being re-introduced in Mauritius after more than 60 years, there are some pathways from the railway corridor that had been converted into promenades in the past. With the implementation of our new railway network, these promenades had to be restored to their original purpose. Therefore, the Government approved a budget of 100 million rupees for the creation of a new recreational leisure park at Ebène, in view to make up for the loss of the Promenade Roland Armand, along Vandermeersch Street at Beau Bassin.”

What are the benefits of the Mauritius Metro Express?

“The Metro Express Project is pioneering a new mode of transport and marking a major milestone in the history of Mauritius as being the backbone of a smart and sophisticated island nation. It will raise the standard of living of Mauritians through job creation and by providing a comfortable, safe and fast mode of transport for commuters at an affordable cost (currently, the fares on Metro Express match those on existing public buses).

“The Project will also include park and ride facilities and enhance a wider choice of mobility and multimodal transportation options. Mauritians as well as tourists will soon be benefiting from the creation of sustainable new recreational parks at Ebène and in Quatre Bornes. It is also expected that the Project will significantly help in reducing traffic congestion by providing a cleaner and more reliable mode of mass transit transport that will help to achieve sustainable economic growth.

“Moving forward, as announced by the Prime Minister recently, the Government has ambitions to expand the new LRT system across the whole island.” 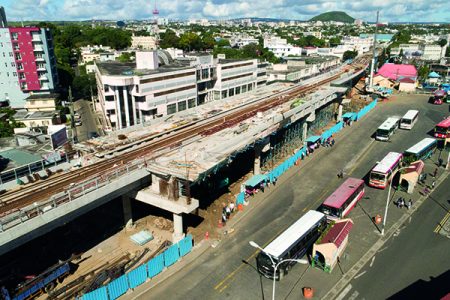