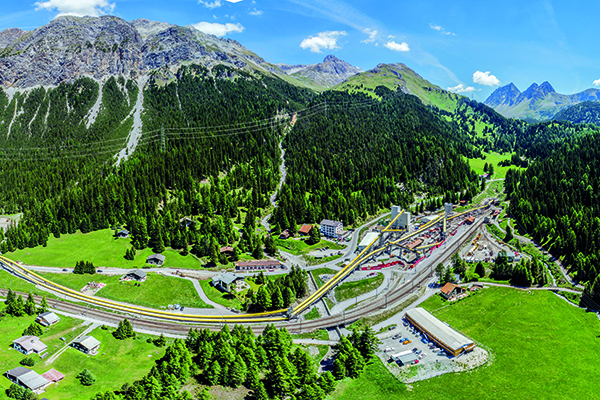 The Albula Tunnel Line is regarded as one of the most spectacular rail routes through the Alps. The Rhaetian Railway climbs up the Albula Valley 1,820 meters towards St.Moritz from Thusis via the Landwasser Viaduct and through helical tunnels. As a glowing example from the pioneering days of the railway line, the line has been recognised among UNESCO’s heritage sites since July 2008.

An inspection of the Albula Tunnel revealed that it required reconstruction. Serious damage to the natural stone vault, drainage system and insufficient rock ballast fill reserves were noticed due to the end of service life of the tunnel track. Furthermore, the clearance area no longer complies with modern requirements regarding rail operations and passenger safety.

The tunnel is placed mainly in hard rock (granite and schists). Excavated materials are then prepared and used as concrete aggregates and the less suitable material is deposited on a specific disposal site near Preda Station.

The Raibler-Rauwacke was a huge challenge that took more than two years to prepare and to cross. After the cavern had been finished, investigations from site tests made clear that the ground material of the Raibler-Rauwacke was very inhomogeneous and partly not injectable. It then became clear that the only promising method would be a combination of injections and freezing the loose ground and 6 atmospheres of water pressure. The drilling work was very challenging because of the ground conditions and the high-water pressure. Thanks to different injection equipment, the work succeeded to seal the permeable zones of the ‘swimming’ Raibler-Rauwacke which was the main requirement for the success of the ground freezing. The freezing was done in the foreseen time and no leak in the frost body had to be registered.

Over the coming years, work to complete the tunnel will include:

Set to open for operation in 2022, construction work started in July 2014 with the main tunnel work starting in August 2015. In 2023-2024, the Safety Gallery is set to be completed meaning that by that time; the whole system can be put in to operation. 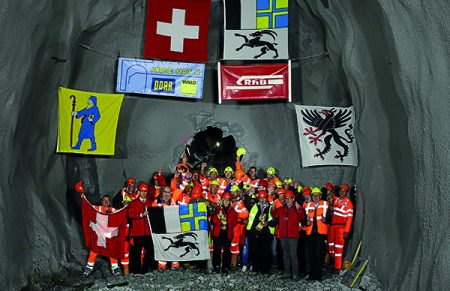