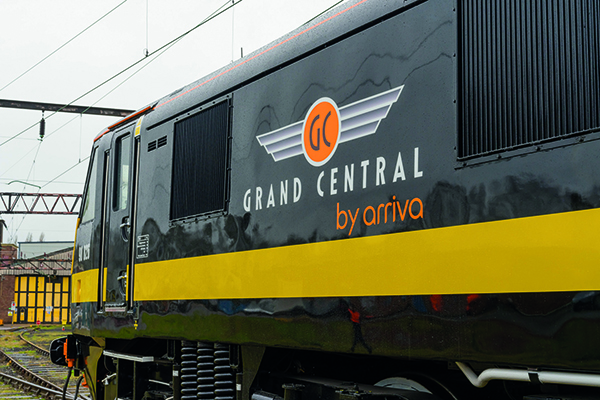 Grand Central has announced it is investing more than £21million in trains to operate on its new North West to London route, with the refurbishment of the first locomotive complete with its iconic livery.

Four sets of MK4 coaches in six-car formation have been leased from Eversholt Rail until December 2026. The coaches will be maintained at Alstom’s Wembley depot and serviced overnight at Arriva North’s Blackpool depot.

The coaches are currently undergoing a full refurbishment at Alstom in Widnes, including Grand Central livery and an interior refresh totalling over £1.5million. This will include free Wi-Fi and interiors designed with the comfort of leisure and business passengers in mind.

The Eversholt Rail contract also includes the short-term lease of three sets of coaches (Mk4s) for driver training along the North West – London route which will begin next month (March).

Grand Central has also hired a pool of five locomotives (Class 90s) from DB Cargo UK (pictured). Four of these will be in service at any one time, with one locomotive spare for maintenance purposes.

These electric, non-tilting trains, will run along the North West – London Euston route, as well as other cleared routes between Blackpool, Preston, Nuneaton, Milton Keynes and London when diversions are needed. The trains will be maintained by DB Cargo UK at Crewe Electric Maintenance Depot.

Paul Batty, Fleet Project Manager for Grand Central, said: “We are incredibly proud of the work that has been done to bring our new fleet of rolling stock to fruition, starting with our first locomotive ready to begin driver training in a couple of weeks’ time. It’s taken a lot of planning and a considerable team effort to get to this stage and it’s fantastic that our customers will soon be able to see our refurbished Grand Central trains in operation.”

Dave Hatfield, Grand Central’s Fleet Director, said: “We’re delighted to reveal our rolling stock for our new North West to London route. These trains have been chosen because of their proven track record and suitability for the service that we will be operating.

“It’s exciting times ahead and we’re thrilled to be bringing our operational expertise and industry-leading customer service to this new route. We can’t wait to welcome our first passengers on board to experience travelling with Grand Central and look forward to offering more choice for existing rail users and new opportunities for people to travel by train.”

Steve Timothy, Stakeholder Director at Eversholt Rail, said “Eversholt Rail are delighted that Grand Central has chosen our Mk4 coaches for its new North West to London rail service.   We look forward to working with Grand Central and extending our successful working relationship with the Arriva Group.”

A spokesman for DB Cargo said: “We’re delighted to be working with our colleagues at Grand Central to provide such a range of valuable services for passengers in the North West.”

Grand Central’s North West route was approved in June 2018 by the Rail Regulator, the Office of Rail and Road.

Grand Central currently operates direct trains between towns and cities in Yorkshire and the North East of England and London. The company has an industry-leading reputation for customer service and value for money and a track record of supporting and investing in local communities around its networks.

In a move which is expected to bring significant economic benefits to the North West, including a boost to tourism, Grand Central will operate up to five new direct train services between Blackpool North and London Euston every day of the week.

Blackpool will gain direct services to London on Sundays, as well as later trains to and from the capital on Mondays to Saturdays. Poulton-le-Fylde and Kirkham & Wesham will each have new direct London services throughout the day, seven days a week.

All trains will also call at Preston and Nuneaton, with most stopping additionally at Milton Keynes, connecting leisure and business travellers to the capital and offering a choice of operator along with great value fares.

Grand Central has successfully recruited train drivers and is in the final stages of recruiting the on-board staff it needs for its Blackpool train crew hub. More information can be found at www.grandcentralrail.com/careers.

More information about the Blackpool route, proposed timetable and daily services is available at www.grandcentral.rail.com/blackpool.