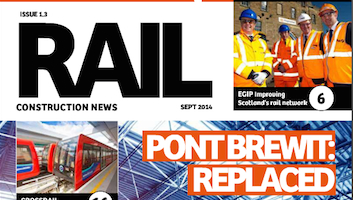 Dear readers, Welcome to the latest edition of Rail Construction News – the premier construction tool for the rail industry […]

In this month’s issue we take a look at the new Borders Railway venture, we catch up with Crossrail and we spotlight the EGIP scheme. The new Borders Railway will see four new stations built in Midlothian and three in the Scottish Borders. Trains will run every half hour at peak times and journey times between Tweedbank and Edinburgh will take less than one hour. The introduction of the new stations was put in place with the notion that there were numerous benefits other than the obvious linking of towns and improving access. Carbon emissions will drop and the reliance on car travel will minimise congestion, which in turn will cut, on average, six road accidents per year. Works commenced on site in early 2012 and is set for completion during summer 2015.

Designed to transform rail transport across London, Crossrail is a £14.8bn project that covers 38 designated stations with the aim of increasing capacity, supporting regeneration and cutting journey times. Once completed in 2018, nine new stations will have been created as part of the project, including Paddington, Bond Street, Tottenham Court Road, Farringdon, Liverpool Street, Whitechapel, Canary Wharf, Woolwich and Custom House. Work started on Crossrail in May 2009 and once work is complete an additional 1.5 million people will be able to access key areas of the capital within just 45 minutes. The project has successfully passed the halfway point with the most recent tunnel unveiled in July 2014.

And finally The Edinburgh Glasgow Improvement Programme, more commonly known as EGIP, is a comprehensive package of improvements to Scotland’s railway infrastructure. The £650 million scheme is a Scottish Government priority and is being delivered by Network Rail in a bid to modernise and upgrade key junctions and infrastructure, as well as widespread electrification of the Scottish rail network, including the main line between Edinburgh and Glasgow. The key elements of the project include widespread line electrification, Queen Street station redevelopment, platform lengthening in various locations, as well as Edinburgh Waverley station improvements. Other aspects of the project include general signalling improvements, junction upgrades, creation of a new electric Millerhill Depot, NEW Edinburgh Gateway station and Haymarket station redevelopment. Upon completion, the project will see the laying of 150km of single track new electrified railway, the creation of one new station and a new electric depot, as well as numerous station renovations and platform extensions.