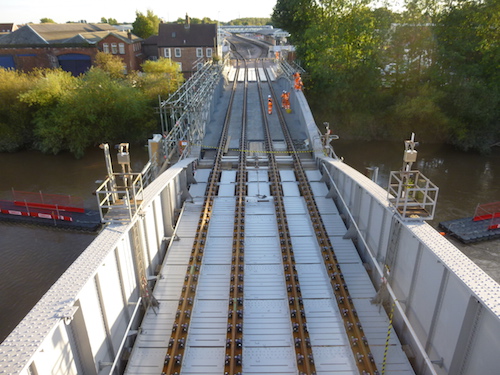 Works to refurbish Selby Swing Bridge, which was built in 1889, have been completed following 9 months on site and years of planning.

The £14 million project was originally meant to start in summer 2013 but was postponed due to the Hatfield Colliery landslip resulting in severe capacity restrictions on the network. 150 freight paths per day needed to be diverted around the blockage.

This is the first major refurbishment of the structure in its 125-year history. The structure itself has suffered with significant loss of paint and had started to rust causing loss of section to steelwork. The swing span had also suffered problems over the years causing associated alignment problems. The large works programme started in March and will be complete by the end of November. However the structure only needs to be closed to rail traffic for the six weeks between July 26th and September 8th.

Due to the Hatfield landslip and the additional year the project’s original scope was increased meaning that the onsite team had more to complete in the same six week time frame. The final scope for the project included the reconstruction of spans one, two and five of the bridge’s five spans. Spans three and four have been strengthened and on span three, 3no cross girders were replaced, as well as undertaking a significant amount M & E hydraulic refurbishment works. The track was completely removed and renewed with weathering steel rail bearers and a fixed track Vipa system. A new winch has also been installed, as have some new steps down to ground level to provide a better and safer access for bridge operators.

To facilitate these works the team had to turn Selby station into a terminus station by installing buffer stops to both tracks. This also had to be undertaken to the north side of the structure to allow the Potters rail freight terminal to work as normally as possible although via a diversion route. The works to install the signalling were undertaken within the first 10 hrs of the 6 week blockade and had trains running again ready for the Saturday morning. Towards the back end of the blockade the signalling was reinstated with the buffers removed and signalling changed over and tested within the last 30hrs of the possession ahead of the Monday morning handback.

A new system has been utilised by the onsite team in order to paint the bridge in a shorter time frame. The Canadian method, Teramust, involved a high pressure, high temperature water blasting machine which removes the existing paint and leaves any solidly adhered paint on the structure, this existing paint is then tested with pull off test to determine if it can be painted over. The paint takes longer to set but takes less time initially and so could be completed in just two weeks; as well as the time benefits this system is much safer for the workers as well as the lead in the paint is not atomised, breathing apparatus and blood testing is not required.

The bridge, situated over the River Ouse, is a five span structure comprising two road spans, a fixed river span, a swing span to the main river channel and a small footpath/cycle path way for the transpennine trail. Span one of the bridge is located near to Selby Station which has remained operational during the works and so Network Rail, who have commissioned the project, have worked alongside the station throughout to ensure the smooth running of the refurbishment.

Rail Construction News caught up with Darryl White, Project Manager from Network Rail, to find out more about the Selby Swing Bridge refurbishment project. He commented:

“The structure has now been completely painted, strengthened or reconstructed, with the track completely replaced with a swing span that is now more stable and reliable. The benefits of the work include the removal of all weight restrictions (HAW & OPOSS) raising of the bridge bash category to double amber on the road spans and an increase from 15mph back to the 25mph line speed. For me to be involved in the project it is a big achievement as I have been involved on and off for four years since the scheme began. It is a massive achievement to see something from the start, through to implementation and completion. Completing the project on time is great and something I’m proud of.”

Kier Group has acted as the main contractor during the scheme. Kier Group is a leading property, residential, construction and services group, specialising in building and civil engineering, support services, commercial property development, structured property financing and private and affordable housing with an annual revenue of £2.8 billion. Kier employs over 16,000 people delivering world-class solutions in the UK and worldwide.

This project is the most significant refurbishment of the rail swing bridge since it was built in 1889. Now that the works have been undertaken many parts of the bridge will not need any further work for decades. The on site team worked 24 hours a day during the six week project in order to get everything finished on time, as well as working alongside train operators to put the best possible alternative travel arrangements in place.

The works have also enabled weight restrictions to be removed from the bridge which will enable freight trains to move more freely along the route. The bridge also now looks smarter and stands as a more presentable part of the area.

Another benefit of the project is the swing span now opens and closes more softly reducing noise and wear improving rail services as a whole.

During the project, which ran from July to September 2014, there were a number of service changes and temporary road closures in order to enable the team to undertake the works efficiently and within their time frame. Road diversions were agreed with the local authority and signs were put in place to keep the local community up to date with the project.

As well as additional bus services being implemented a drop in event was held to ensure local residents could find out more about the works. The drop in events also enabled authorities to minimise disruption to the local community.

The bridge reopened at the start of September allowing passengers to catch regular trains from York to Selby.

Pontoonworks specialise in the supply of pontoon working platforms and access systems to the construction industry. The business has an impressive track record providing safe access solutions for many high profile construction engineering projects across a wide variety of sectors, with some particularly successful projects in rail maintenance, bridge repairs and local authority works.

Building the business over the last 10 years the firm has established an impressive portfolio, being involved in many capital investment projects across the UK. Pontoonworks are playing an integral role in the Leeds Station South Entrance project on behalf of Network Rail, as well as working on the Crossrail project and supplying pontoon for the 2012 London Olympic Games.

Most recently the firm has worked on the Selby Swing Bridge Refurbishment project, commissioned by Network Rail. We caught up with Murray Pulman, Operations Manager at Pontoonworks, to find out more:

“We were tasked, at short notice, with providing a deflection pontoon to direct debris away from the scaffolding installed on the bridge. The river at this location is extremely fast flowing with a very large tidal rise and fall, spanning five metres.   The team had very poor access to the area, so we had to develop a mooring system which enabled us to install a pontoon in a harsh environment.

“This project reinforces our involvement with the rail infrastructure programme Network Rail are running aimed at protecting and preventing damage to bridge structures. Bridge works are a key element of our portfolio and so it is good to be involved with these kinds of projects, it acts as a great opportunity to demonstrate our skills and abilities, in a very short timescale.”

1st in Rail Ltd specialise in the supply, installation and maintenance of new railway tracks and have been in operation for eight years. The firm have worked on an array of projects for a number of high profile clients including Siemens, Manchester Metrolink, Northern Rail, Kiers, VolkerFitz Patrick and Grahams Construction.

The firm have recently been involved in the Selby Swing Bridge Refurbishment project, supplying and installing the new railway track on the bridge. The company was on site for six weeks of the project. We caught up with Jamie Kelly, Regional Director at 1st in Rail, to find out more about this scheme. Jamie commented:

“This project was important to be involved with as it was a high profile scheme which was technically challenging. This project used new technologies to remedy an old problem.

“We pride ourselves on the quality of work and our after service.”

Bridge Rescue Services specialise in the provision of rescue boats, crew, recovery equipment and first aid cover during activities taking place on, or near, the water in the construction industry.

The company has been providing safety boat and rescue cover throughout the Selby Swing Bridge Refurbishment project from May until October 2014.

We caught up with Gosia Golata, Director and Owner of the company, to find out more about the firm’s involvement. Gosia commented:

“For over five months our highly qualified crews on the water looked after the safety of workers involved in the scheme. As a firm we have overcome many challenges connected with this demanding stretch of River Ouse. Difficult access to water, fast two-way river flow as well as the extremely high tides made this project challenging and very fulfilling at the same time”.

“Additionally, for 6 weeks during the project we were providing 24/7 safety cover to workers and our reliability was absolutely vital to the success of the project. We are proud to say that all our goals have been achieved 100%.”

The firm prides themselves in their professionalism and highly qualified crews, as well as their reliability. Gosia added:

“We are proud to have worked on this high profile project and to have delivered a quality service.”

B & B Industrial Dismantling Ltd

B & B Industrial Dismantling Ltd specialise in the dismantling of industrial structures and asbestos removal. The firm has been in operation for over 30 years and since their inception have worked with an array of high profile clients.

Previous clients include May Gurney, Network Rail and London Underground which have employed B & B to undertake the following projects G & GR, the dismantling of Leeds Railway Station and Hammersmith Depot Trainshed temporary works and dismantling.

We caught up with Andy Blount, Director of B & B Industrial Dismantling Ltd, to find out more about the firms involvement in the Selby Swing Bridge Refurbishment project. Andy commented:

“We planned and undertook the removal of the existing spans, the piers and abutments and were on site for a total of four weeks. This project was important to be involved with as it was a high profile, challenging contract that involved a lot of interaction with other trades and companies.

“We pride ourselves in providing a good service; we gain most of our work through word of mouth and so the work we do is an advertisement of our services.”