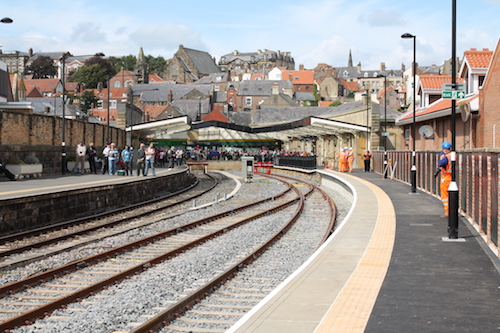 The construction of a second platform at Whitby Station has now been completed and is set to further increase tourism in the popular town.

Whitby Station originally had five platforms which were all closed, except one, in the 1970’s when the land was sold to Scarborough Council to be used for car parking space.

Since 1970 the station has operated with just one single line platform, which was adequate for the rural location. North Yorkshire Moor Railway however was eager to construct a second platform on the site in order to be able to transport more passengers to and from Whitby.

Premier Construction caught up with Nigel Trotter, Infrastructure Director at North Yorkshire Moor Railway (NYMR), to find out more about the project. He told us that works began on site in February 2014 and finished this September. Nigel said:

“I am absolutely delighted that we have been able to do this project. As a student I did my surveying course in Whitby and I never dreamt that when it all closed down we would be able to build a new platform and run far more trains in and out of Whitby; so it’s a dream come true!

“Indications from various parties believe the North Yorkshire Moors Railway already generates £35 million each year in the community through tourism. This project will increase visitors to Whitby and so no doubt will up the figures generated by tourism.”

Nigel said that during the project the 250 metre long site, which only stretches 20 metres across, got extremely congested. Despite the challenging logistics of the site all of the onsite team worked together as one big team in order to overcome the difficulties.

NYMR project managed the scheme whilst working in partnership with Network Rail. The initiative has only been possible thanks to £1.1million of funding awarded to the NYMR in the first round of the Government’s Coastal Communities. Further funding of £850,000, from Network Rail, has also made the scheme possible.

“This is a great achievement. The project is a great example of collaboration between rail partners to benefit leisure travellers whilst protecting vital services for the commuters and schoolchildren who use this route every day. We are very proud of the North Yorkshire Moors Railway and their steam operations.”

Construction Marine Ltd CML – acted as the main contractors during the project and has worked alongside NYMR through every stage of the project to re-instate the platform. Charles Mortimer, CML Director said:

“Working on heritage railway projects with North Yorkshire Moors Railway is always special because it gives the team an extra sense of pride to think we are helping maintain the North’s railway history. This was a complex multi-disciplinary project comprising the installation of two new railway lines, a new signalling system, modifications to the electrical layout and power supply as well as construction of the new second platform.

“Time was very tight and at times we instituted seven day and 24 hour working to complete the job to be ready for Whitby’s tourist trade. We couldn’t have done it without the goodwill of nearby residents.”

NYMR has been supported by Northern Rail during the recently completed works, to ensure that passengers by both transport providers were not disrupted. Rob Warnes, Planning and Programmes Director for Northern Rail comments:

“As the station operator, we are delighted to see any improvements for rail users in Whitby and welcome the opportunity for increased numbers of customers to visit the town by rail.”

The North Yorkshire Moors Railway is open every day until the 2nd of November running trains between Pickering, Goathland, Grosmont and Whitby. Day rover tickets are priced from £25.00 for adults, £21.50 for seniors, £12.50 for a child, and £54.00 for a family of two adults and up to four children.

“The public launch of our new expanded service brings about the conclusion of a project that has taken almost two years since it was first agreed with Network Rail. Already the only heritage railway in the UK able to run on both its own heritage line and the network rail, we are now the first and only heritage railway to have embarked on such a large scale project with Network Rail.

“We are delighted that we are now in a position increase the number of NYMR trains serving Whitby to cater for the growing popularity of visitors to travel to and from the resort by heritage steam trains. This project and the support we have received, reflects great confidence in the importance of NYMR to the local tourist economy.”

PBH Rail is a consultancy providing permanent way and OLE design solutions for public and private sector clients. On the Whitby Station project, PBH Rail was responsible for designing the permanent way layout, platform, gauging and buffer stop work on the scheme. PBH Rail was involved with the project from inception through to construction, including the undertaking of CRE duties.

“As a company based in Yorkshire, with a national work portfolio, we take special pride in local projects. Further to this, working on a high interest project such as Whitby, we’re supporting the organic growth of this valuable heritage railway and associated tourism industry.”