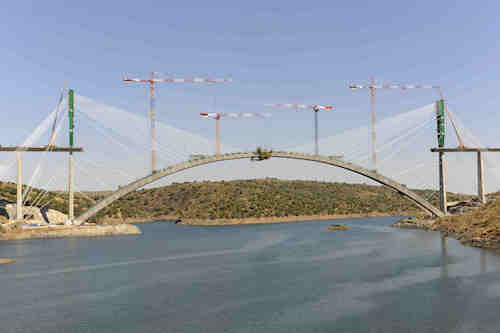 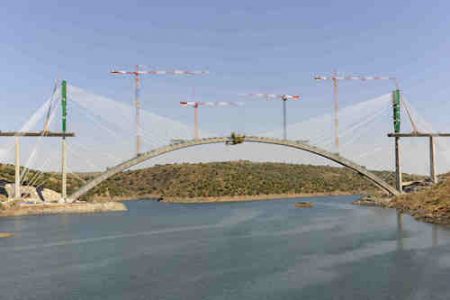 An impressive new viaduct has been created over the River Almonte, near Madrid, which will boast the largest span of high speed rail in the world, surpassing Dashegguan Bridge in China, with 336m.

The construction project began in May 2009, with plans to be finalised in May 2016.

The large concrete arch has a superior deck of 384m main span, with its foundations located outside the reservoir. This large arch span is the main section of the viaduct which impressively stands at 996m long and 36m tall. Acting as the main contractors, a joint construction venture has taken place with FCC and Conduril, carrying out the construction phases. 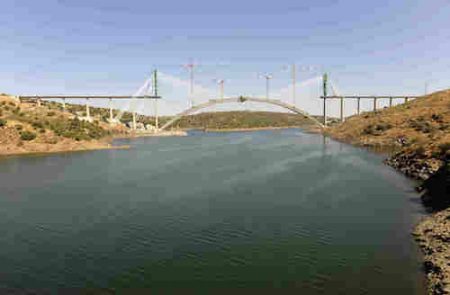 “I worked in the conceptual design of the bridge as project leader during the detailed design stage, working at Arenas & Asociados”.

At the beginning of the developments the approaching viaducts were erected making use of a movable scaffolding system. Fourteen post tensioning concrete box girders were cast in place spanning 45m each. Subsequently the main foundations for the arch structure were excavated and the direct bearing concrete abutment was cast in several stages due to its large dimensions. 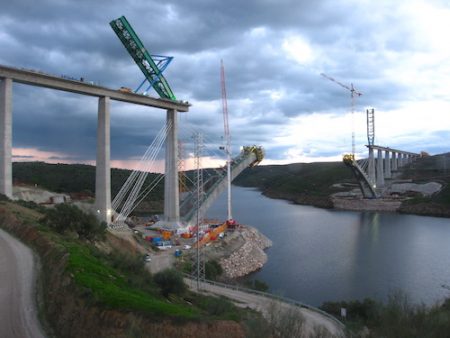 “The project has been challenging from the beginning due to the exceptional dimensions of the arch and the specific requirements of high speed rail bridges required using an innovative structural scheme in HSR arch viaducts. 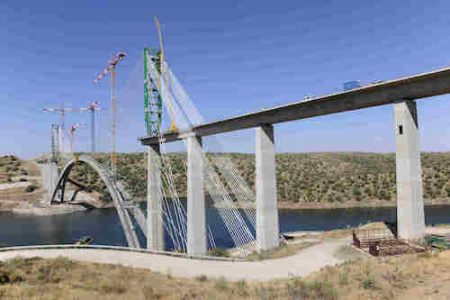 “There is a real satisfaction to seeing our commitments showing in our work, with our visions being fulfilled. Our attitude for an overall design approach, a holistic thinking, is being made a reality in Almonte Viaduct. The bridge has been an architectural and engineering challenge that has pushed the boundaries of innovative materials, construction methods, structural software and aesthetic design in arch bridges”.

In terms of how the new viaduct will benefit the community, the new high speed railway will close the gap with other communities that will profit these advances through the years, in terms of economic growth, tourism, synergies etc. Although the distance to Madrid stands at 350km, the time to travel there will be reduced to one hour and 15 minutes. 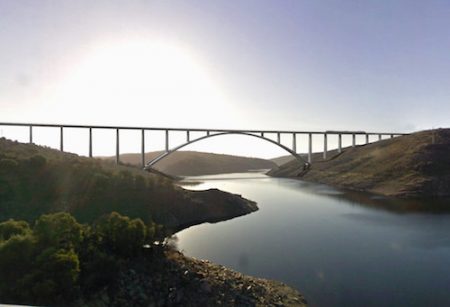 “To test bridge behaviour under wind effects, a wind tunnel test was carried out at West Ontario University in Canada during project phase. The wind engineering firm, Oritia and Boreas, was hired to develop to models and to analyse the result, as well as being in charge for the assessment of the aerodynamic stability.” 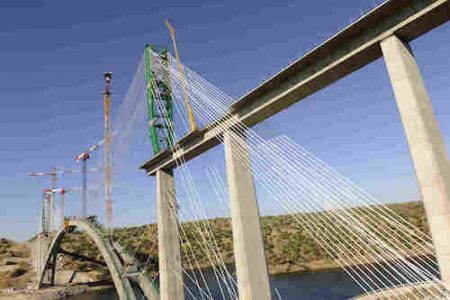 Oritia and Boreas Wind Engineering offers applied investigation, technological development and advanced consulting services in the study of wind effects on structural systems. The company objective is to introduce the best technologies to satisfy the growing demand for studies on the wind effects on tall and complex shaped buildings, bridges, flexible structures, renewable energy systems and sports science.